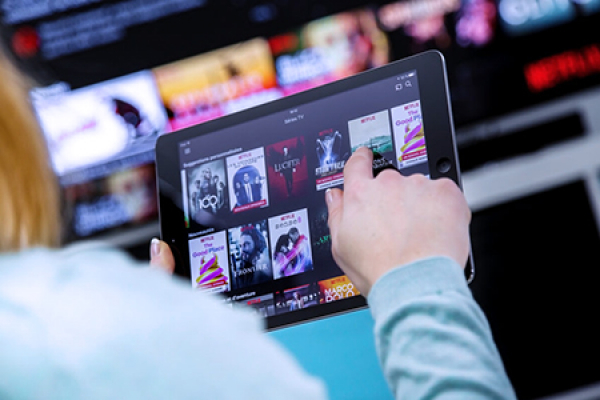 Comcast Corp. became the latest media giant in the past week to increase its stake in the streaming wars with the broader launch of NBCUniversal’s Peacock service – giving those stuck at home because of the coronavirus pandemic even more video to binge on.

It may sound like a crowded market with likes of Netflix, Hulu, Amazon’s Prime Video and Disney+ just to name a few heavyweights – but online streaming services are cashing in on you spending more time at home.

Netflix’s earnings from April to June released on Thursday showed the company’s revenue rose almost 25% to US$6.2 billion, while it also beat expectations to add 10.1 million paid subscribers in the second quarter. Netflix and Amazon shares are up more than 50% this year – on a different track than broader stock market, which is recovering from the impact of COVID-19 in the first half of the year.

So, who’s spending more money on entertainment while at home and where?

In a recent global survey of nearly 18,000 people, a quarter of those in 26 countries say the cost of entertainment such as electronics, movies and books has increased since COVID-19 began.

Added to this, the data shows younger people are most likely to say the cost of entertainment has increased with almost a third (30%) of those under the age of 35 globally citing this. That compares to a quarter of people aged 34 to 49 and just 18% of those aged 50 to 74.

“This is opposed to digital services, which have been quicker to change their business models during the pandemic versus traditional TV, which has more or less remained the same,” said Conlon. “There are new entertainment sources available to spend on – one example would be Premium VOD (Video on Demand), where a number of movie studios have pushed their films that were meant for theaters directly online.”

Colin Guldimann, Economist at Royal Bank of Canada, agrees, saying he’s seen a shift towards online spending in his consumer credit data and thinks part of why young people are reporting higher entertainment spending is that they’ve been more likely to shift such spending online.

“Gaming drove entertainment spending during the pandemic, and while we can’t identify age group due to the aggregation in the datasets we use at the moment, I expect younger cohorts have been doing much of this gaming spending,” said Guldimann – referring to what’s happening in Canada.

“Things we’ve seen that have moved in our entertainment spending category are computer software and gaming-related spending, and as of early summer, golfing and other sporting sales.”

Spending on electronics have also been relatively strong, according to Guldimann, as people have spent more time isolated and sought things they can enjoy within their homes.

In May, Japanese gaming giant Nintendo reported a 41% surge in profits in the first three months of the year when many countries first entered lockdowns. Its share price hit more than decade-highs in June on the back of demand from consumers.

Conlon adds that companies that were already set up to deliver entertainment products into consumers’ homes like streaming services and video game publishers are benefitting the most from the fallout from COVID-19.

“The entertainment industry has adjusted quickly by making sure that their content can get into the consumer household,” said Conlon. “In many cases, content has been pushed forward to make sure that it hits the market quicker.”

Meanwhile, even as brick and mortar stores are reopening, Guldimann said online spending broadly has remained higher, suggesting people have become more comfortable with doing more of their consumption online.

However, in terms of streaming, it will be an interesting to see what happens when distributors run out of content that had already been created before COVID-19, according to experts.

“During the pandemic, content production has largely been shut down, so we’ll possibly see some interesting new ways to create content,” said Conlon.

There is also a growing sense of “streaming fatigue” among consumers after months of indulging in video content at home.

Netflix shares fell more than 10% in after-hours trading on Thursday within an hour of it releasing its second quarter results, because investors were disappointed with the company’s third quarter revenue guidance of $6.4 billion ̶ which fell below market expectations. The streaming giant warned that growth is slowing as consumers get through the initial shock of COVID-19 and social restrictions.

In addition to this, almost three in five people (57%) globally said their entertainment costs remained the same since COVID-19 began – the only majority response. Those in Europe were most likely to say this with Germany (78%), Sweden (73%) and the Netherlands (71%) at the top of the list.

Conlon said some entertainment spending behaviour will return to normal once the pandemic is over, but some consumer behaviour will continue to be disrupted.

“When consumers are given a new option and it is better than a past option, it changes the market,” said Conlon. “I would guess that Premium VOD will go down a bit once theaters re-open but will remain higher than it was before the pandemic.”